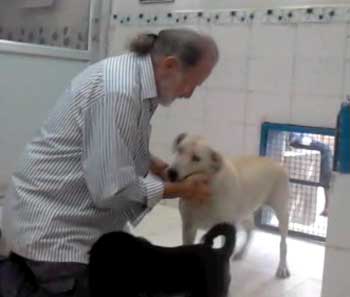 Late afternoon. At Ananda Ashram in Kerala. Doing a short retreat to replenish.

Our species is so arrogant. So unfeeling towards creatures in the Animal Realm. There is so much awful, awful suffering. Please God. Give me the inner strength to engage in battle and to be okay inside. Give me the strength to be ferocious when it counts. But to be still inside, and not get lost in it. Give me the strength. The detachment. The perseverance to be a Great Warrior. To help in any way. Large. Small. Give me the Wisdom to understand the Interconnectedness. To remember that any one thing changes everything else. That there is incredible power in the smallest action, good or bad.

But most of all give me the strength to love. To love deeply and embracingly in the midst of all this.

My beloved Dr.Raja and Vishwa who protect me and take care of me. Need this from me.

My beloved Staff. Whom I love so dearly. Need this from me. They need me to be alive enough. To deeply appreciate their specialness - Sekar. Mani. Pondi. Ramesh. Raja. Jayakumar. Prakash, Suguna, Veera, and all those I've not named ... Their work is so difficult. So, so difficult. Our voiceless creatures run free ... On the veranda. So many. Regularly eliminating. Yet the floor is so clean. Hour after hour. Day after day. And they stay open and loving. And bless our beloved charges. Giving them safety, and love ... I couldn't do what they do. I don't fully understand how day after day they can do this and stay alive to the moment in a loving way ... Bless them. Bless them. Bless them ... I throw myself at their feet in gratitude ...What inner qualities do they possess to be able to do these magnificent things?

We sent the Satya newsletter out a week ago. The two photos of our beloved Satya in the suffering state she was in prominently starting the letter. So graphic. You could experience her suffering.

There are some who experienced the photos as offensive because they were so focused on suffering. But most experienced it in the way we meant it. We meant to show the incredible power of love and caring. The breathtaking transformation. From Hell to the Joyful Meadow.

It involved so much ... A compassionate person driving by and seeing Satya on the road. Stopping and bringing her to the Shelter. It's no small thing. He didn't know if she were rabid or not. Diseased or not with something catching. Potentially aggressive.But he did it.

And poor, poor Satya. She was almost certainly an "owner dog" that had been dropped off ... abandoned to die. The family who abandoned her probably had her since the time she was a puppy. And probably had children. All of whom Satya loved. And she was abandoned by them. In pain. Thirsty. Hungry. Afraid. Not understanding. Everything she had known and loved was taken away.

Then into Dr. Raja's gentle, quiet, competent hands. It's an experience to see how animals pick up his quiet, pure Heart and surrender to his touch. The beginning of the physical metamorphosis.

Then to our staff with Vishwa closely overseeing. The healing of her Heart. To help her trust again. To love. To be joyful ... Then Vishwa finding the loving home for her. It isn't easy to find a home for an adult dog.

All this was done in a sea of love and caring. Which she must have felt as soon as Dr.Raja started working on her ... And dear, dear Satya may you be protected, safe and joyful in your new life. (Vishwa checked several days ago. And she was incredibly happy. The lady of the house was home. And she adores Satya. Who follows her and gets a steady stream of love).

Dr.Raja...Vishwa...Are almost staggering under the work load. It being so heavy is truly auspicious. It's not a temporary condition. It relates to the number of emergency rescue cases we have. In January there were between 100 and 110. Almost unimaginable. In the early years we had five, six, seven a month. Slowly it increased as people became more and more involved in getting the creatures in trouble to us. Either bringing them in or calling us and we going out to get them. I'm not talking about just ailing animals. I'm talking about serious cases, mostly homeless dogs.

It's not that the number needing emergency care has increased. It's that
they're now getting to us. We're only a small group. We don't know what's
happening all over. There are over 150,000 people in Tiru. Thousands of
homeless dogs. And hundreds of monkeys, cows, goats, and other creatures
wandering around. That's not even mentioning the thousands of birds, deer,
snakes, squirrels, chickens, turkeys ... There's no way we could care for all
these creatures without the Community. We need their help ... I said it's
auspicious because it's a quantitative sign of the transformation in the
relationship between the animals and the people. Which is the only way the
quality of life of the voiceless ones can truly be uplifted.

This transformation I'm talking about has national significance. For animals and humans, alike.

In the beginning, the first year after opening, it became clear that there was no longer widespread abuse. And the number of aggressive dogs seemed to have decreased significantly. Then, after a year or two, all the animals appeared to be healthier and happier. The ones we had seen and the ones we'd not seen. All of them. It took time to realize that the relationship they had with the people amongst whom they lived was being transformed.

Then each year the relationship steadily improved. People stroking dogs. Talking nicely to them. Feeding them. The dogs responding with warmth to the humans. Swishing tails. Smiles. More approachable. Many, many people commented. They'd never, in India , seen dogs more friendly. And each year it increased. (Remember, too, that at this point we've sterilized 80 to 90 percent of the homeless dogs. And seen a lot of them in the clinic for treatment. After their exposure to us, especially the sterilized dogs who spend six days in the Shelter convalescing, they are much more open to human beings). The Westerners who are here in large number during the cooler months, November through February, are the ones who saw it most clearly. For they'd be gone for eight months, and could see the changes more dramatically upon return. And unsolicited, they'd approach us and thank us for the amazing changes that were taking place.

But an important comment that I'd heard for the first time recently from a close friend is that he felt that the people in town were being nicer with each other. And this hits on something that is super important. The nature of the Heart is that if it opens, it isn't directional. If it opens, it simply opens more in many directions. If people's Hearts open to the animals, they will also be nicer to each other ... Mahatma Gandhi's famous quote of, "The greatness of a nation and its moral progress can be judged by the way its animals are treated" is really a comment about the nature of the Heart. If humans are good to each
other than they'll be good to animals ... It also goes the other way ... If a
community's Heart opens to animals, then it will also open more to the humans.

It's estimated that there are from ten to twenty million homeless dogs in India . May reaching out to them. Caring for them. Learning to love them. Be a means of uplifting the community's in which this happens. It's so difficult to deal with us humans directly to get us to be nicer to each other. We're so complicated. So resistant. And this is an effective way of doing it ... May the Government recognize this and pour resources into it. Money. And good, good people. It's so important. What's happening here is beyond anything I could have ever imagined.

I'm humbled by the extraordinary power of love, commitment, and perseverance of Dr.Raja and Vishwa. I'm so deeply touched by the Staff. So little of what's going on now depends on me. At times I feel inadequate. Om
Namah Shivaya..

Bless me so that I may be guided to raise the funds to secure their Work for the Future. Please God ... I have so little time left.