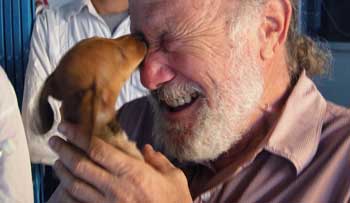 Leslie with one of his faves. But aren't they all?

And here it is 2012, already. For those of you younger 'uns, you're going to find out how time passes in an increasing blur as you age. It's going so fast that I sometimes think that before I know it I'm going to be dead.

Clearly the indication of great blessings. My life is so full. I'm so grateful that in this, most likely the last stretch, I've karmically ended up in this configuration that involves lifting so much suffering. It isn't many times in life that you have a chance for your efforts to count so much. And it feels so good. I could have been involved in doing good feeling things, and enjoying meaningful relationships. But here I am, immersed in this endeavor.

Canadian Ken our creative genius, known as The Great One, did a short video-ette (45 seconds) of me as an Indiana Jones type character. It's not posted for general viewing. Would be too "over the top". Mostly a "for the grandchildren blurb". You have to go to a private address to view it. I can't tell you how many times I've watched it. Would be too embarrassing. " But I swear to you, I don't think it's pure ego (though 16 out of 27 times I'm usually wrong). There's something intriguing about it for me. Oh, what the hell, here it is, click here.

I think that it's the awareness of "what might have been" if we hadn't come into being.. We never really know what might have been. We can only imagine. But I remember the almost unbearable experience of seeing. Dogs. Puppies. Everywhere. Fighting amongst themselves. Many starving. Injured. Sick. So much suffering. Before we opened.

Ken just told me he has to leave for Katmandu in 10 days. A shock. I'll miss his presence. How excellent it was to have him here for almost two months. With his unending creative surges. Video-ettes. Stories. Signs. Logos. And on and on.

Relationships with the dogs is so pure and uncomplicated. The immediate return of affection. Instantaneous forgiveness. The surrendering into being protectively embraced.

I'm having a difficult time writing this diary entry. These following comments are being typed over a month after the above passages were written.

There are so many beautiful stories unfolding in this dear, dear Shelter. Truly beautiful. A number of new ones every week. Ken and Daemian (also a creative phenomenom) keep cajoling us to write them up. To let them know. We have done that a few times. But scores and scores have simply receded into the dreamlike past. Sorry. The energy doesn't move in that direction. We're just so fully engaged. We know it's important. But it doesn't happen. We'll try harder.

A friend showed up about two months ago. Sautamali. From Germany. He comes for several months each year. A true Sanskrit scholar, no less. He's a guru brother. We have the same guru. He met him in 1974. I, in 1975. I always think of him as the German Woody Allen. (For those of you who don't like Woody Allen, think of him as Clark Gable, Clark Kent, or Charlie Chaplin).

The reason I'm mentioning "Woody" is that he's a keen observer, and I tend to put significant credibility in his observations. He said, "Leslie, the difference this year in how kindly people are being with the street dogs, is stunning." He went on to say that a number of Foreigners had made similar remarks to him.

How heartwarming it is to hear that. How important. I know I've commented about this before, but I want to again. In abbreviated form. (I) If the Heart opens to the animals, it simply opens in all directions, and we'll be kinder to each other. And (2) The only way the lives of the homeless dogs can be truly uplifted is if the relationship they have with the people amongst whom they live is transformed.

My Baba is again chanting as I write. Maybe he'll inspire me to share some interesting things. I think not. So I'll say to you that in these, my final years, happiness is not one of my "goals". By that I mean I don't do anything hoping it'll make me happier. If happiness comes than that would be welcome. For sure. But if it doesn't, that's okay. Actually I'm doing very little to get to another space. I'm simply doing what unfolds before me. And it fills me. This endeavor. There is suffering. Warmth. Love, Fear. The whole mix. But most of all Love. And I am truly blessed.

Before signing off, I want to tell you about Marimoota. He's one of our staff. He's in his forties. Not much larger than Mickey Mouse. He's a simple villager. The hardest worker in the cosmos. I love Marimoota. He can't understand English. I can't understand Tamil. He takes care of the veranda, and all the wonderful creatures on the veranda. The veranda is s-o-o-o clean. And the puppies/dogs are so well cared for. That sometimes I want to leap over the separator and hug him.

I also sometimes think of buying him a blue elasticized shirt with a big M, and a flowing blue cape. I worry about him because he works so hard. "Mari, are you okay?". He looks at me. Someone translates. He smiles, thumb up. Clearly exhausted. If I were Bill Gates, or John D. Rockefeller, or Ambani, or Ratan Tata, I'd raise him and personally pay 100,000 rupees a day.