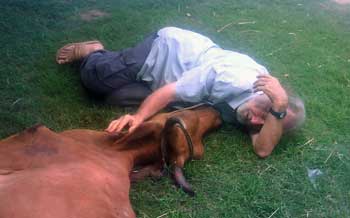 Leslie takes a nap and then back to work.

Morning. Sitting inside Tasty Restaurant as I write. Just finished breakfast. Cornflakes with yogurt and fresh fruit over it. The best homemade yogurt you ever tasted. You would love this place. It's on top of a two story building. A wood/coconut leafed irregular multi peaked roof overhead. Hand made in the distinct "Indian Style" that is the craft of an Indian "improvisational builder/craftsmen". All kinds of nooks and corners. And one, if it's not crowded, can find a little space to be alone.

The young woman (remember, anyone younger than 60 is young to me) who together with her husband own this place is a delight in pure loving simplicity. When I enter she greets me with special warmth and love knowing the service that we do. As I come up the stairs, as soon as someone on her staff spots me, they call out to her, "Tata"..."Tata"..."Tata" (Grandfathter ... Grandfather ... Grandfather). And I can hear the silver anklets she's wearing jingle as she hurries over to greet me. Yes ... Yes ... Yes ... We go through our ritual of ordering my regular breakfast. Then she always adds, "Water?" to remind me I have to take my ayurvedic pills. What a way to start the day!

I'm on the spiritual path. Have been for almost forty years now. I tell younger people that it's really a search for ones own Heart. It's different for everyone. Each has to find their own way back. I tell the youthful ones that it's very good to put great effort into finding a thing to do in the world. But if you lose the connection with your Heart that it all eventually becomes dust. I tell them that there is nothing on the outside that can fill them. That there's nothing on the outside that can give them that communion, that meaning, that happiness they're seeking. That it has to come from within. From their connection with their own Heart.

So the Master Game is finding the way back to themselves. My Guru said that it's not being loved that counts. The whole world can love you, but if inside you're not in a good space it doesn't help much. And at night when you go to sleep you're all alone. It's loving and caring that count. It's that nectar that gives things a deeper meaning. That gives spaciousness inside. That keeps you in contact with the Heart....May we all be blessed .... I mean all .... Our dear ones .... Our friends .... Our enemies ... May we all be blessed with understanding and happiness.

You haven't heard from me in a long time. Have just traversed a difficult inner crossing. Not out of it yet. But have made it to safer waters. It was the kind of inner territory where you have to will yourself to get out of bed. Or to brush your teeth. And here I am. I marvel. Offer endless thanks for Vishwa and Dr. Raja. How strong they have become. How ably they navigate the cross currents of the incredibly complex happenings to keep the voiceless creatures safe and cared for. How beautiful their unwavering focus on lifting suffering from the Animal Realm. Seven days a week. Twenty four hours a day. It's not a job. It's a life of Service. They're young, both age 30. It is they who will take our beloved Shelter into the future.

They are so different. Dr.Raja, deeply still inside. When he approaches an animal they instinctively pick up his Heart. How trustingly they surrender to his care. He holds nothing back. On the outside one sees quiet gentleness. Absolute purity and sincerity. People, almost without exception, respond to it. I've actually in six years never heard anyone. And I mean anyone. Verbalize a negative feeling about him.

I remember my Guru saying that, "The physician heals with the Heart". Dr. Raja can't say no to anyone. Some take advantage of his goodness. So be it. To him it seems to make no difference. His patience seems like a bottomless pool. I have seen him tested so severely. Regularly by me. But including others and those, in very trying situations. I've never seen him "lose it". Bless you Dr. Raja. There are thousands of people who love you. There are enumerable animals that are okay now because of your Heart. Your skill. And your caring.

And then there's Vishwa. Having such endless skills and knowledge that he can't possibly be an earthling. Heroic. Feerless. Energy and enthusiasm almost inexhaustible. I guess we call that unwavering perseverance. How broad and deep his knowledge of and feeling for animals. How as often as not he has done something during the night. No matter what comes up he handles it. No matter what I ask of him he's game to move strongly ahead. With all the things that happen in the running of a full blown shelter. With all the situations that need attending to. He seems to be all over the place doing. His heroic rescues.

Without these two pillars, our Shelter would not be the Shelter. The Shelter isn't something that was put together by me. And these two were hired to run it. They are the Shelter. We are the Shelter. It unfolded organically around the three of us. They are devoted to me. And I to them. When it gets real tough and I falter, they protect me and handle things. It's amazing how capably and sensitively they run things. I step further and further back. Making fewer and fewer comments. These two, who were my students, have been launched some time ago. And have an unbelievable array of talents and strengths. Way beyond what I could have done, personally.

Four years ago we would go out on three to five rescues a month. Vishwa now goes out on thirty to seventy. It's a reflection of the increased awareness of and concern for the animals amongst the human population. Ninety percent involve homeless dogs (half are puppies in trouble —l ost their mothers and too young to survive, sick or injured). The others are mostly monkeys, cows, and smaller wild creatures. The grievous injuries — horrible fractures, injuries to the head, internal injuries, broken backs.

Serious health afflictions — awful tumors, serious skin cases, parvo, distemper. We don't have anything like this in the West. It's a level of suffering we don't see. In the West we're not exposed to a continuous flow of grievous injuries/sickness and death...But there are so many moving stories always happening. Miraculous recoveries. Some unbelievable. And they are happening in a field of love and caring.

It's a struggle to get financial support. To get a base to survive into the future, I now feel that strong local support is needed. I've changed tack on the approach. The Municipality. Many of the institutions. They are not moved by the lifting of suffering from the Animal Realm. I've developed a practical, civic path to them. I mean I better have a good strategy because we're in danger of "going down"... There's a position here called the Collector. It's like a regional governor. It's the most powerful office in each vast district. When I first heard the term Collector I was thinking of a low level bureaucrat that went from village to village collecting taxes. Then when I went to see him, I was amazed.

His offices were in an enormous "parliamentary-type" complex called the Collectorate. The individuals filling these positions are IAS's , Indian Administrative Service (top 3 percent on the very difficult Indian Civil Service exam). They're usually very high quality individuals who are service minded. If I can enlist the Collector's support, and have him call in key people and indicate that he would like our endeavor to get strong local support, it would probably happen. I have strong support from a well connected, well known person to, along with me, make the presentation to him. My changed approach is straight civic.

For three to four decades the Municipality tried to control the homeless dog population by periodically culling through killing. But in spite of their attempts the population inexorably increased. With widespread suffering (as a deterent to tourists and pilgrims), a rabies presence, and aggressive dogs. For the first time the population is under control (decreasing for almost three years), suffering and overcrowding have been eliminated from the streets, and it is rabies-free. The human/homeless dog relationship has been transformed. Three years ago we had two to five rescues a month. We now have twenty to seventy. We have a busy out-patient clinic with a portion of animals being homeless dogs. And we get ten to twenty puppies a month. Street puppies in trouble — they lost their mother when too young to survive, or they're injured/sick.

If the Shelter went down the municipal impact would be felt immediately. All these creatures we are treating and rescuing would come flooding onto the streets. In the very first month there would be 25 to 40 suffering/dying animals on the streets. The municipality would be flooded with phone calls. In a year there would once again be over 250 suffering and dying creatures on the streets. Rabies would re-surface. The good homeless dog/human relationship would collapse. After three or four years the population would again be out of control. It would once more be a scene of unmitigated suffering. The Municipality would be inundated with calls. With problems, most of which, they couldn't satisfactorily resolve.

We have a dedicated staff of eighteen. Including two full-time vets. Working twenty four hours a day. Clinic. Hospital, Adoption. Hospice. Sanctuary, 24/7 rescue .... It has taken six years and $450,000US to get to this point. We are now caring proactively for all animals. Small. Large. Domestic. Homeless. Wild.

Tiruvannamalai is one of the very, very few municipalities in all of India that has "no animal problem".... No animal problem. The streets are clear. The relationship of the homeless dogs and the humans amongst whom they live has been transformed. Whenever there's a problem (24/7) they simply call us ..... Things are good and stay good only because our devoted staff is working hard day and night. But to the Municipality viewing the streets day after day, there seems to be nothing happening. Things are good ..... No problem ... Why worry ... And that has led to complacency .... The problem is that there seems to be no problem. Our operating budget is 400,000 rupees a month. (There's been high inflation, especially in salaries and building materials. We could have done the same thing three years ago for 200,000).

Was writing part of this earlier today while at the Shelter. Dr. Raja and I sitting in the large storage space we generously call the dispensary. Twenty or so puppies crowded in with us. Curled up on the floor so they can be close. Every once in a while I'd pick one up, stroke him and kiss him. Whispering, "I love you". Then I pick one up, and before I can remember who she is and to keep my mouth closed. Her 18 inch tongue darts out like an anteaters, and "frenches me". What a day.