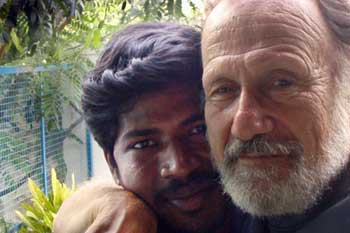 Vishwa gets his daily hug.

So much has happened since last I wrote. One of the major things was a shelter money crisis. It's the first time ever we've had to deal with something like this. We actually ran out of money. Fortunately I was able to get a personal loan of $15,000 that gave us enough time to move towards our supporters to get money in. Survival itself was on the table.

The thought of us going down is almost unthinkable. Thousands, literally thousands of animals would fall into unbounded suffering. All the animals we care for through rescues, emergencies, adoptions, clinic visits, and hospital activity would come pouring onto the streets.

In the first month alone there would be 20 to 50 suffering and dying animals on the street. After a year there would be over 250, which is where it was when we first opened. The good relationship between the homeless dogs and the humans amongst whom they live that was so hard to get would collapse. When there's that much suffering it's overwhelming and people can't deal with it. They just cut the dogs out of their awareness. Rabies would re-manifest. In three or four years the population would once more be out of control and at least 7,000 more puppies would be born each year - most of whom would suffer and die.

It took us six years of focused effort, and many, many blessings, let alone an enormous amount of money to get to this point. Where all the animals—homeless, owner, domestic, wild. large, small, are cared for. Where the relationship between homeless dogs and the humans amongst whom they live has been transformed. (Tiru is probably the only sizeable municipality in the nation where this has happened). It's unlikely that this would ever again happen, It would simply be lost. There might be sterilization programs, and perhaps a clinic, but nothing like what has magically unfolded here.

The pressure was enormous.We reached out in so many directions. And thank God there were enough of you out there that responded to carry us through. Immediate survival is no longer on the table. We have a three or four month platform to get things together. But we now carry a debt in excess of $25,000.

There were two people in particular whose shakti buoyed us up. I don't know if we could have gone the distance without them. That was Sharon Callahan and Kathleen Prasad.

Sharon is a well known animal psychic, and has a foundation for the well being of animals, amongst many other things. We use her floral remedies (like Bach Flower remedies) in the Shelter. She is a longtime, strong supporter of the shelter. She has a website at http://www.anaflora.com.

Kathleen has a foundation for teaching Reiki for Animals. (She has a website at http://animalreikisource.com. I came in contact with her through my daughter, Debbi. Both have an international following. Both, in their newsletters, sent out beautiful pleas to their supporters to help. For several months a steady flow of over two hundred donations came in. Many were automatically recurring monthly donations which gives us support going into the future. Thank you dear Sharon and Kathleen.

There were many, many others. Some who were financially pressed themselves sent in modest donations. But money gets much, much more mileage here and every dollar really helps. All were sent in from the Heart and give us the energy to prevail and persevere.

There were some that were able to give enormous amounts. $1000, $2,500, $5,000. There was a bodhisattva yogi from Dubai whom I had only heard of. I was aware of his activities. That he was a yogi. And that he had a very beautiful heart. I sent him an unsolicited plea. Told him about us. And heard nothing for two weeks. Then Dr.Raja called from the post office. A check had come in the mail. He asked me to guess how much it was for. And then he told me. Five lakh. That's equivalent to $10,000. Bless you. I think that you would like to remain anonymous.

Thanks to each of you. For those who are not inclined to donate, send us your good wishes. Say a prayer for us. Tell others.

Well we had never had to ask for money like that. Solidly for three months.we must have moved in a hundred or two hundred different directions. I imagine a young actor/actress trying to get work has to the traverse the same kind of territory. Going to audition after audition. Receiving many rejections. But keeping the goal in mind, and just persevering.

Thank God for Dr. Raja and Vishwa. It's simply humbling. Their protection of me. The limitless energy and devotion that goes into their work. So much suffering is being lifted. Being inside the shelter is a deeply moving experience. All these vulnerable creatures. Feeling safe. Cared for. Resting. Playing. Chasing. Thank you. Thank you. Thank you Dr. Raja and Vishwa. My gratitude. My feelings for each of you are so vast and deep.

We could have put together a decent shelter without them. But never, never like the one we have with the two of you. It's the energy. The love. The unassuming, unpretentious commitment that is operating all the time.

To you out there. I wish you could experience it. I wish for you the blessing at some time in your life of being in a situation where the efforts you put forth are able to lift so much suffering.