We called him Sweet Hanuman. Poor baby. Hit by a car. Two months he dragged his body around. Gaping wound. Legs useless. Smelling. Stoned by humans. Rejected by his brethren.

Vishwa got him. A village 30 km away. 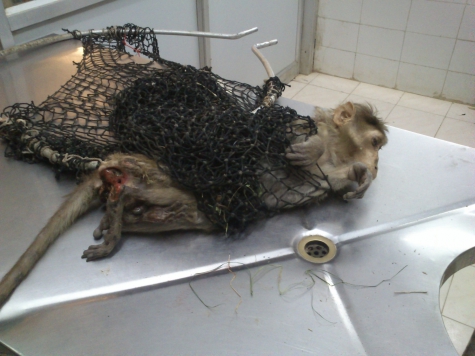 Made physically comfortable by Dr.Raja’s magic. Starvation had taken its toll. Organs too badly damaged. Given two weeks to last. After two days put into large cage in the clinic. Chants playing. Interested in watching the clinic happenings.

Threatened by almost anyones approach. We limited it to the three exceptions. Gentle, gentle Sekar…Pure of Heart, Ramesh…And dear Vishwa.

Would turn on his side and cover his head when he wanted to sleep. Leslie walking in…Alarmed…”What’s wrong with Hanuman”….”He’s sleeping, Leslie”.

Felt safe and secure…Relaxed into our love…His favorite foods—bananas and apples. Only Vishwa could touch him…After a week, cradling him in his arms, Vishwa would take him for walks outside. 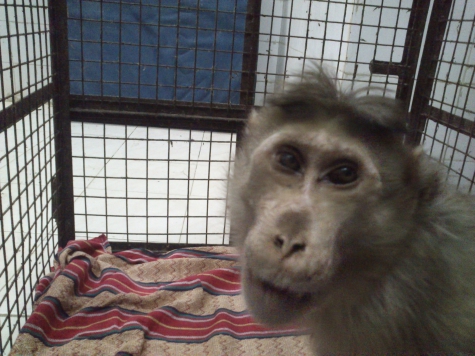 Two days before he died, he stroked Vishwa’s chest with his little arm.

Sensing death was near, Vishwa one night took him home. Dear, sweet Hanuman…died in his arms during the night.

Buried with sacred substances and a photo of the sage Ramana Maharshi that was known for loving and protecting animals. Put on a Red Tara prayer list, the Tibetan Buddhist Goddess of Compassion. An advanced group of Tibetan Buddhist yogis for 49 days, each morning before dawn, will send him energy to guide and protect him on his journey.

Thank you dear Hanuman…for the love you filled us with.