We're not only reducing the stray dog population in Tiruvannamalai and treating sick and injured animals of all kinds ... 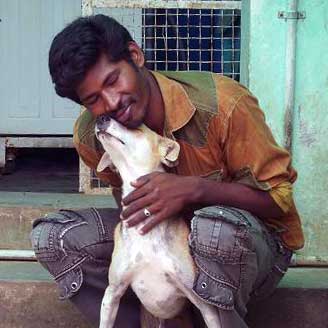 ... we're loving them too. Unless animals feel safe, cared for, and loved, deep healing will not take place. For the animals that stay with us for a brief time or for a long time, it 's the most important blessing we can give.

Our love will stay with them the rest of their lives ... even in some distant time when someone might be throwing stones at them, somehow they will weather the unkindness a little better.

If one thinks deeply about how to uplift the quality of life of street dogs. You may come to the simple self-evident insight that to really uplift their lives one has to transform the relationship with the humans amongst whom they live.

If one can change that relationship, then everything changes. One way of effecting that change is in how the dogs are caught for sterilization. Almost everyone in the community has observed a dog or two being caught. Many shelters farm out the catching, or do it brutally. Justifying it by saying, "no dog wants to be caught, It's inherently a brutal process". The people observing the catching see the "animal activists" engaged in some of the most brutal acts they've ever seen. And that may have a negative affect on the way people treat animals themselves.

We do it differently. We do it humanely. It's more costly and more time consuming but it is vitally important. At this writing we have caught over 5000 dogs. If three or four people have on average observed each "catch", you're talking about 15,000 to 20,000 people. This is, in fact, a TEACHABLE MOMENT. When they see the reassurance, care and love given to the dogs, it touches something inside of them. It dramatizes that they are vulnerable, feeling beings, too. And it sets up the energy for future change.

Other teachable moments are when people come to the Shelter and see the love given. We have had over 17,000 visits to the clinic. Or when they see a compassionate rescue.

In Tiruvannamlai that key relationship, between the homeless dogs and the humans amongst whom they live, has been transformed. It is visible. Here and now. We experience it in the Shelter, too, in several ways. In the earlier years we used to get four or five rescue calls a month. Now we often get over forty. It's primarily because more people are concerned about the animals well-being. More people are protective of them. And it's so moving to see rickshaw drivers (and others) bringing a homeless dog to the clinic because he hasn't been eating much, or his energy is low. Tiruvannamalai may be one of the very few municipalities of significant size in all of India where this has happened.