Some of our dear ones on the veranda. 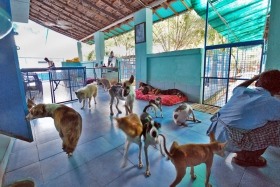 Some of our dear ones on the veranda

This little girl was hit by a rickshaw. Only a month old. Her tiny back was broken and she was paralyzed.

Dr. Raja gave her steroid injections directly into the spine. Neurobion injections for nutrition. Good food. A lot of love from the Staff. Gentle massage.

The video tells the tale ...

This little one didn't make it. 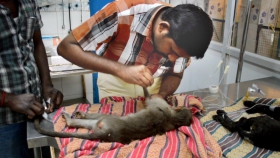 Placing the IVThis sweetie was only three months old. A girl. She was brought in semi-conscious in a state of severe shock. She had been hit by a car. No external injuries. All internal.

Dr.Raja immediately gave her a steroid for the shock. Then an I.V. with a painkiller, neurobion for nutrition, and a medication to stop the internal bleeding.

She was on the examination table for only fifteen minutes. The two compassionate young men who brought her in were standing nearby, watching.

She was semi-conscious throughout. Got Dr. Raja’s reassuring, loving care. Gently stroked and kissed. Mantras said softly in her ear.

Our little girl was gone. 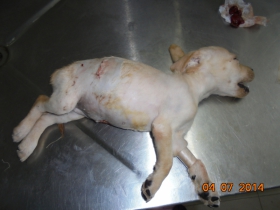 A nearby shopkeeper called the Shelter. Vishwa went out. The water in the well was completely covered with trash. It looks like a solid bottom. But it’s not. Actually deep water. The mother was almost hysterical. The baby again and again tried to make it up the side.

Vishwa descended on a rope. But the baby kept moving away from him.

Then he gave the order to lower a bucket on a rope. Yes. Yes. Yes. The video tells the story.

May all beings benefit.
May all move towards compassionate understanding.
May all be blessed with wisdom.