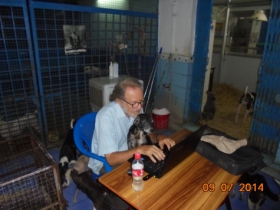 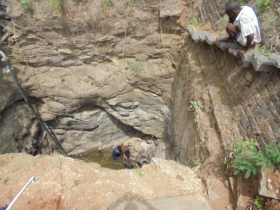 One of our beloved in-patients

How beautiful she is ... 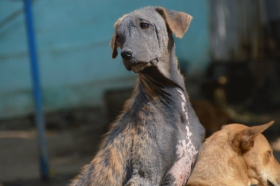 The size of the tumour on this girl was stunning. She’s 10 to 12 years. Pretty old. Especially for a street dog. The growth is a mammary tumour. It probably took a year to get that large.

She passed Leslie as he was walking on the main road. He did a double take. Took Pondi a day to get her. She was otherwise in pretty good health. We had her in cage 2 (17’x 12’) with several other dogs for a day or two. Then put her out on the veranda where she could move around. She wasn’t very social. Didn’t mix with the other dogs and wasn’t interested in attention from the Staff. (Leslie tells us it might be an “age thing”. He notices it in himself).

For four or five days after the operation she often looked at where the tumour had been. And occasionally licked it. She still tends to be solitary, but has become a little more social. Mixes some with the other dogs. And responds to attention from the Staff. Several puppies like to be close to her when she’s lying down…And she lets them.

After several more weeks of convalescence Vishwa will release her to her territory. We think that she is one of those that crave freedom and think she’ll be very, very happy.

Dear, dear Ramani. May you be protected and guided.

We are always here for you.

This guy was a street puppy, about 1½ months old. He’d apparently been hit by a rickshaw and got a surface injury that became badly infected. Some loving person brought him to the clinic. Dr Raja treated the infection. We kept him in the Shelter for a month or two longer, bathed in love and caring. His spirit, body, and coat completely replenished. And Vishwa adopted him into a good home.