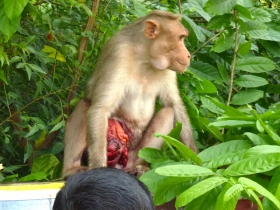 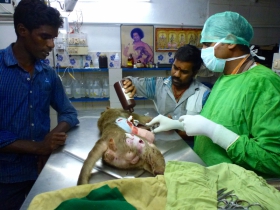 Baby turkey. About 20 days old. Brought in by owner. 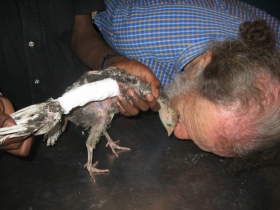 This guy had badly infected paws. His territory was around I-Way cybershop. They called the Shelter. Prem and Prakash went to get him.

The first video is of Prem bringing him thru the front gate. It must have been a weekend because you can see how busy the clinic is.The second video is of him on the outside examination table. I try to relax him. And he responds…a little. His eyes soften some, but you can still see concern on his face.

Thru the front gate

It was a bad fungal infection. On all four paws. Dr.Raja cleaned the wounds. Gave him injections for bacterial and fungal. He was put into a pen in intensive care. Had to stay there two weeks while the infection had a chance to start healing. He got a lot of love and attention, but it was still hard for him.

Then he was released into the garden where he could run free. Treatment was bathing the feet every three days, and applying ointment. Fungal pills every day.

He has a nice temperament. But four dogs passing by jumped him and he got a bad back wound. Murugan called us. His territory was around I-Way cybershop. Pandi and Kanagaraj went out to get him.

He was pretty shaken when they brought him in. We gave him a lot of loving and reassurance. Dr.Raja gave him a painkiller. Anti-biotics. And stitched the wound. And he stayed with us for two weeks.

The first video shows one of the people who love him that came in just before he was released. Clearly happy to see her…The second video shows him prancing around in his territory when we released him. Very, very happy to be home.

Glad to see her.

Even more glad to be free.

These three Little Ones were just released from their initial quarantine

The reason I’m including these videos is that it’s very cute the way they built up enough courage to make their way out of isolation into the clinic. You can hear Dr.Raja softly whistling to encourage them.

In this video they are in the stall with the gate closed.

About to be let out.

The gate is open. Dr.Raja is  trying to coax them out.

Come on out, Sweeties.

They finally make it to the clinic...  At least until Radha barks and they scamper back.

Made it to the clinic.

Trying to build up enough courage to re-enter the clinic. 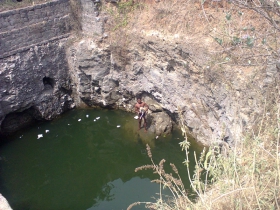 This baby was about a week old. He was born with an incomplete formation of his joint.

Dr.Raja operated. Lasted two hours. He cut a contracted tendon, and he removed the joint capsules (bone covering) which allowed him to straighten the leg. It would be stiff but he’d be able to use it for walking. It was the difference between life and death for him. 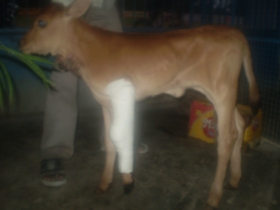 Thank God, he can have a life.

He was brought back ten times. Every third day for the first two weeks. Then weekly for four weeks. The recovery was not one hundred percent. He could use it, but limped.

Letter written to Swami Muktananda of Ananda Ashram in Kerala

We had been open almost two years. It was one of those periods where I was crossing difficult inner and outer terrain. I was depleted. Went to Ananda Ashram in Kerala for five days to try to replenish. This letter of gartitude was written on the last day. I gave it to Swamiji just before I left.

Swamiji is the Spiritual Head of Ananda Ashram. He is the lineage holder of a line of Great Beings—Papa Ramdas…Mataji…Swami Satchidanda. He was commanded by Swami Satchidanda before he died to head the ashram.

There is nothing like Ananda Ashram in all of India. It is known for its Heart. And its generosity.

I have included the letter to give you a sense of part of the inner struggle one goes thru to help lift suffering from the Voiceless Ones. I think most that have completely focused on the Work go thru it in their own way.

Back in my room after your teaching.

Not sure where to begin. I wasn’t going to talk to you about this. For I felt it wouldn’t help and I didn’t feel that I could convey to any being what is going on in my Heart of Hearts and how desperate I am.

I’ve been blessed in this lifetime with extraordinary perseverance and diligence.  The flip side of that blessing is that I am a cosmically slow learner. I can go through things again and again without getting the lesson. My sadhana (spiritual work) is not an elegant one. I don’t really get purified through insights. God deals with my stubbornness and stupidity by hitting me again and again as I persevere. And finally collapse. Then I painfully pick myself up from the ashes and again, slowly, begin moving. But somehow I’m aware in those times, in that process, that inner garbage has been blasted away. There is more spaciousness in my mind and I am closer to my Heart.

I am doing the Shelter because I “cannot not do it”. Enjoying. Being happy. Or unhappy…has nothing to do with it. I know that I am supposed to do it. I know that if I didn’t, many, many “Voiceless Creatures” would go through unimaginable suffering. And in my Heart there is no way—no matter what—that I could walk away.

I have given it everything I have in me. There is nothing left. I feel bankrupt—physically, emotionally, psychically, and spiritually. What lays before me is an incredibly complex set of things to do. Some almost overwhelmingly difficult. I shall not retreat, but at this point I don’t have the strength to do it.

Your teaching today filled me with Light. With hope. I will pray, for the first time in my life, from the bottom of my Heart. And it is the bottom. He must do it for me.

I tell you all this in deep gratitude. With a vastly deepened caring/love for you.

I lay this gratitude/my Heart at your feet. Knowing it is He who must rescue me.

I am so sorry I am leaving. But I must return to do the Work. You have all the blessings I am able to give you.

I am so glad you are there for me. And for the many.

This gal was hit by a rickshaw. Her back was broken. She had five recently born puppies with her when she first came in. They all died. She adopted this litter of seven who’d lost their mother.

Leslie’s extemporaneous talk to the Staff

This is a talk I gave after a puja.

Several very short videos are included taken prior to the talk. They give a sense of the spacious, loving energy in the Shelter. The devotion of our Staff…That energy…That love…Is what goes to our beloved Voiceless Creatures. 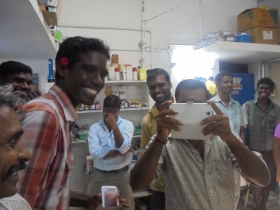 The talk, itself, is eight minutes. In it’s simplicity, it’s deep and indicates the level of awareness of our Staff. They’re never told anything just to improve morale. We don’t deal with morale that we feel is superficial and manipulative. We deal with relationship, Heart, and depth.

Many of you may prefer to skip this one.