The regeneration of young, forlorn Swetha

We got a young Dalmatian girl in a few months ago. Think she's a little over a year. Had been an "owner" dog but was simply abandoned when they left. Vishwa got reports of her for several weeks and finally caught her.

She was scared and confused. The family probably had children whom she loved. They just dumped her. And left. She lost everything that was dear to her. Without any understanding it was just GONE.

The beauty of it is how quickly she bounced back. She is absolutely joyful, and bounds around wrestling and chasing. She adores supervisor Raja....I named her Beauty. But someone else named her Swetha, which is what stuck.

Swetha babe, you're a joy to watch.

She plays so hard, she drinks enough for a camel to make a desert crossing.

We got a call from someone that had found a home for her in Nilgiri, which is about seven hours away by car. It's a beautiful area. It was with an elderly woman who loved Dalmatians and had one whose partner had recently died. She had a lot of land and a caretaker who really liked dogs. Swetha would have been outside on the land most of the day. Clearly, she would have been taken care of beautifully. But I told this woman that I felt Swetha needed a home type setting, children, and a lot of active loving...And that her situation, tho' she would be taken care of beautifully, wouldn't provide the essence of what Swetha’s super-affectionate nature needed.

Vishwa has found a good home for her locally. She, in a sense, wouldn't be given as much "care". But they have two boys, four and eight, who are over the top at the prospect of getting her. They've been to the Shelter several times...the father and the boys...and it's a good match. 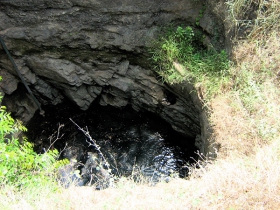 Vishwa went out on the call. A three month old baby monkey was lying on the ground. It was near the big Shiva Temple. He was very weak, and Vishwa was able to simply pick him up and bring him in.

Dr. Raja said he only had a mild head injury. Still, the speed of his recovery is impressive.

You can see how weak the little guy is in these two shots. 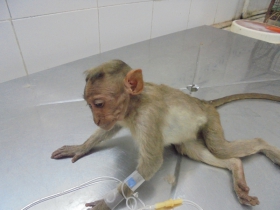 The video of his release only one week later shows how quickly he recovered.

Well, little guy, we didn’t get to know you very well…Blessings to you…We are always here for you…And remember your sweetness with love.

The incredible magic of Feeding

Last month I talked about the joy and life in the Voiceless Ones as they Played and romped. The unrepressed joy of the disabled ones as they joined in. The Heart warmth one got from watching them. Truly amazing that they have such “alive”, lives.

But it’s in the Feeding that each time I’m present, I see the unfolding of a miracle. These are all pups or homeless dogs who have dealt with who knows what injustices and cruelties in their lives. And certainly, many have dealt with hunger. It amazes me to see all of them fed together, almost all hungry, with such stunningly few conflicts. One would expect a riot…Open warfare…Greed…Territoriality…Fear of being deprived.

It’s the deep trusting…The security of getting theirs…Of their relationship with each other…Of letting others get theirs before them…Of the surety that the Staff, the ones who look after them, who care for them, who express love…will give them theirs……..I don’t really know…These are fragments thrown in the direction of the complexity that’s manifesting in this miracle…The miracle of them overcoming their primal survival instincts. Of not pushing and fighting to get their food…It’s the definitive assertion that they feel …Safe…Cared for…And loved…

Be aware in some of the videos you can see that the strongest are not pushing forward to take their food first.

I have never, never seen anything like this…It’s the energy…The quietness…The Grace…

This first video is of an uneventful feeding. Nothing extraordinary. At least, seems ordinary, unless you keep in mind what would happen if you tried to feed only five dogs all together…All of whom were hungry…And all didn’t get their food at the same time.

An uneventful feeding. Bless them.

In this second video PureHeart Sekar is feeding some Furry Ones with the puppies watching on the other side of the divider. Supervisor Raja picks up an extra bowl and puts it down for the pups. Then one pup, over enthusiastic, wants it all to himself. Raja picks him up and plops him in with the Big Guys…He does fine. But my guess is that he’d fight off Godzilla to have the bowl to himself.

One pup is really enthusiastic.

This is a shot in the Garden area…All Big Guys…No pups…No disabled…Our Staff is simply terrific at the feeding. It wouldn’t happen as it does if they weren’t very, very present and aware.

I’ve included this video because it shows this clearly disabled guy moving in to get his food. Which he gets without having to push or fight. And that when he gets it no one tries to move in to take it from him. But he’s left to eat in peace.

This is a shot of a guy who apparently doesn’t like crowds and lays back to wait for his food…Which he then eats in peace…Can picture him going into a restaurant and saying to the Maitre d’, “Table for one, please.”

Table for one, please.

And this one is our beloved, Mira…Quotes from the November 2014 newsletter:

Beloved Mira. She'd control all bowls, if she could.

These three videos are just miscellaneous snippets…Mani feeding a puppy with an injured back…Three pups off by themselves eating alone…And one pup, for whatever reason, dining separately..

A young pet duck (not named Donald) with a broken leg

There’s something sweet about Dr. Muni treating the young duck as his “owner” holds him.

It was a simple break. He was just treated and released. 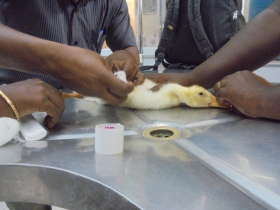 Hey guys, I know you're helping but this is a bit much.

May you have a full life, Young One…May you get much love and caring…It felt very good to help you…May all beings benefit…Love, Us 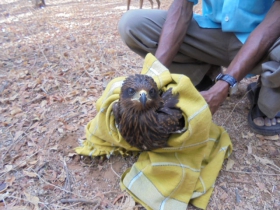 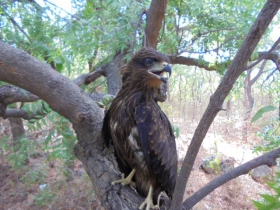 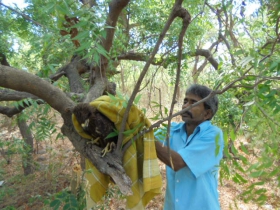 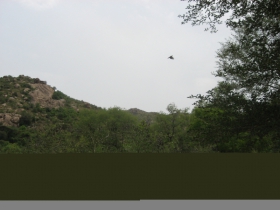 Poisoned furry one that “made it”

By the time the owner got him here the poisoned pup was pretty far gone.

Dr. Raja gave him an i.v. with an antidote, anti-biotic, Neurobion (multi-vitamins), mega doses of vitamin C, and a sedative. His owner gave him love and caring.

In the second video you can see that he’s responding and his chances are good.

In the third…He’s made it across. Yes!!! He was still too weak to release…and his young body needed a little more time to clear. So Dr. Raja kept him for two days.

In this last video, at the beginning, you see the joy erupting from him in the pen when first he sees his owner, who then carries him out. His owner is a little bit uncomfortable at being video taped…and I suspect that Dr. Raja is playing “film director” and telling him to do this and that….Well, I guess Dr. Raja is entitled.

Om Namah Shivaya...Be careful what you eat little guy...We love you...And such a blessing that you made it...We’re always here for you...From, “Da Gang”

Leslie feeding the dogs buiscuits outside the Shelter.

Leslie has 4,000 of these biscuits specially made every month. It’s a private thing, not connected with the Shelter. They’re about 5 inches across. He always has about sixty in his backpack wherever he goes. There’s not much nutrition in them. But they’re hard and crunchy. And the dogs love to chew them and hear the sound. If he comes upon a furry one that looks hungry, he has a stash of Pedigree to give him.

He’s been doing this for six years. That’s 300,000 biscuits. He said that it’s good for the dogs just to get the stroke of affection and kindness. And it’s good for people to see him being kind to the dogs. It helps change the way they relate to them.

People every once in a while ask for a biscuit. He tells them they’re only for dogs. If he starts giving it to one person, within a week hundreds will be asking. And it would bankrupt him.

Biscuits for the guys.

Please...Keep your support coming...Spread the word Dear Ones...We need all the help we can get.