Think Ken made this Indian Jones “take off” for me to show to my grandchildren. It’s less than a minute. And I’m embarrassed to tell you how many times I’ve watched it.

Rescue of dog from Chennai, 4 ½ hours away

I’m taking a different approach on this story. This involves the treatment of a dog from Chennai that was rescued by a devoted animal lover there who brought him to us by car. I’m going to start with edited exchanges of the emails between us.

Left him in his usual place yesterday night under care of building watchman. But he was gone today.                Watchman dropped him in area 5 km away. Went to the place and searched in vain for two hours.

I am writing this because I don't know what else to do. I'm deeply saddened. Do you have any advice?

He’s an amazingly secure fellow. Remember he just had a 4 ½ hour ride from Chennai. He’s never been in a car before. He’s totally away from everything he knows. And is in a strange place with strange people. And he is just comfortably eating.

What a brave boy.

Animals are so surrendered to Dr. Raja. I love watching him examine a creature—how nonchalantly he checks his skin, looks inside his ear, and examines his maggot wound. (He’ll get a more thorough examination after he’s settled in a little.)

This is a shot of the maggot wound. (The Chennai vet did a good job of eliminating most of the maggots.) The second photo is of it, partially healed. 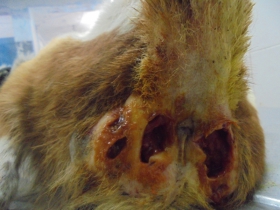 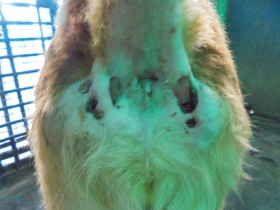 This is taken a month later, a few days before Ghurhu picked him up. His coat is beautiful. And you get a quick view of the completely healed maggot wound when Dr. Raja lifts his tail.

This next one, taken about the same time, just shows how happy he is.

This last video was taken when Ghurhu picked him up. You can hear me asking Ghurhu if he thinks Valathambady is happy to see him. And we’re joking around a little. Because Ghurhu has to re-acquaint himself.

Om Namah Shivaya... Dear Valathambady, you’re blessed with a guardian angel... It was very nice having you with us... Our prayer is that you be guided and protected... With love, From all of us.

An “owner dog” that got a big slash wound

He’s eight years old. The owner didn’t know how it happened. But it looks like a knife wound, as tho’ someone slashed him.

Its a big wound.

Dr. Raja did a ½ hour operation under full anesthesia. The video where he’s working on him is before the operation. When I saw it, I asked Dr.Raja why he hadn’t used a local anesthetic. He had. The guy was sedated and had a local, but some pain clearly got thru while the wound was being cleaned.

Well, he was stitched up by our beloved Dr. Raja, and released to his owner to continue his life with a man that really cared.

Blessings, dear guy... May you be protected and guided... May your journey be filled with Grace. 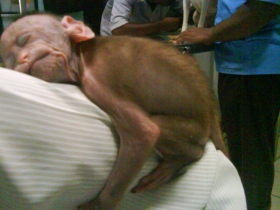 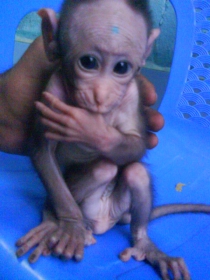 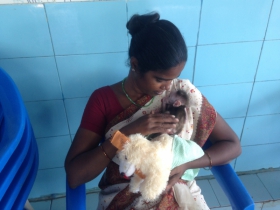 Someone abandoned some babies just outside of Vishwa’s house. This is him at 5am with the sweeties before dressing and coming to the Shelter.

Vishwa and the sweeties.

Okay, Little Ones…You’re in good hands with good people, and we will protect and take care of you. 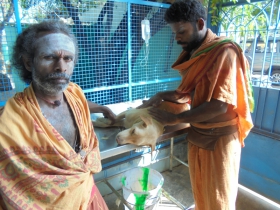 Puppy that doesn’t want to be bothered. Just wants to sleep.

Included this because this little guy just wanted to sleep. Nothing, but nothing could induce him to get up and start responding…A nuzzling puppy that’s lying with him. One that’s chewing on his basket. A big guy that comes sniffing around….Reminds me of my teenager days during a period of rapid growth when I did nothing but sleep.

Give it up, already.

Well dear pup…you’re going to make it all the way... Thank you, God... Protect this little guy... Please. Please. Give him a good life... From the Hearts of All of Us... With love.

(The guy in the photo below is our "Poster Boy" for fund appeals.) 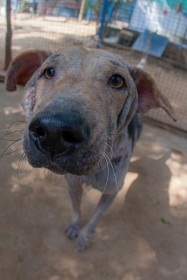 There is considerable pressure from very strong increased Shelter activity.

Number of monthly visits to the clinic:

This whole unfolding has given rise to intense operational and financial pressure.

We're traversing some difficult terrain, and can use any support you're inclined to give. Recurring donations, even quite modest ones, are best for us. So please...Keep your support coming.