The Shelter received a call that 28 calves, illegally bought for slaughter, were being held outside in the sun. No water. No food. Suffering.

We sent Vishwa. Told him to take photos. And to be careful. Not to get aggressive until I got there. In meantime, I called the Vice-Chairman of the Animal Welfare Board of India (AWBI). Verified the law. (We didn’t have authority to impound. Only the Police Dept. or the Municipality could do it). Asked Dr.Raja to contact a police sub-inspector who supports our work to see if he could be ready to move quickly for us.

When I got to the scene, the Municipality had already moved to impound them. Waiting for trucks to get them. Police Dept. were going to turn them over to the Shelter. The calves had been moved into the shade and given water and grass.

The 60,000 rupees the butchers had spent to purchase them was at risk. Potential violence was in the air. Heavy violence. It could start in a flash. Those aligned with the butchers, against the activists, and the Shelter.

After I left the Tiru Chairman (The highest elected official in the Municipality. Having great political power) intervened on behalf of the butcher. There was going to be a 6pm meeting at the Police Department between the opposing parties. I asked the Vice-Chairman of the AWBI to call the Collector (Like a regional governor, the highest official in the entire District) for support.

We later got word that the Police Department had released the calves to the butchers on the basis of a written statement that they would be treated well and would not be slaughtered. (Right…They were just going to keep them as pets).

We then got a pledge of 60,000 rupees to try to buy them. We were told it was too late. They were all gone ... and probably all slaughtered.

But then miracle of miracles...a week later, totally unexpectedly (we still have no idea of what happened except that the political pressure we put forth bore fruit), the police turned over ten of the calves to us on basis of an order from the court.

Through an animal activist in Chennai we were put in touch with an organization that saves cows (they have 1000, probably a Jain group) and gives them a good life.

We had them for several days. Vishwa took good care of them (what else would the Martian do)...Hay, green grass, oil cakes, etc...and put Veera, who loves cows, to watch them at night....

He then sent them off to Chennai in a large lorry where they had an enormous amount of room. Put dry straw on the floor so it would be soft. Good hay in with them for eating. Arranged an elaborate cover over the top of the back so they wouldn't be in the sun. Arranged to stop and give them green grass and water half way. Sent Veera along to reassure and care for them.

Anyone else would have stuffed them in an open back small truck and just shipped them.....That's our Saint Vishwa. 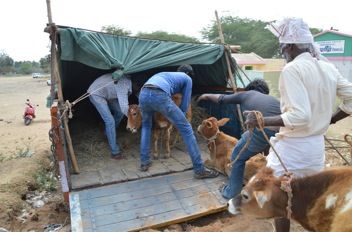 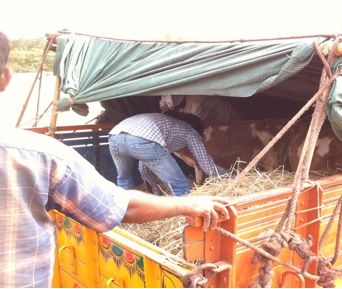 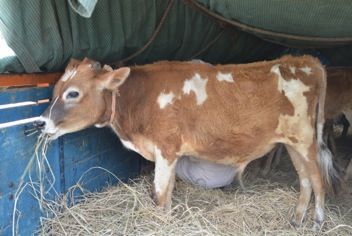 Relaxed and content and ready for the journey to their new life.