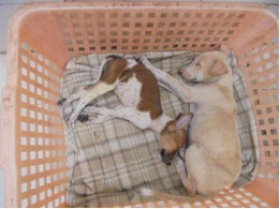 This sweetheart, the spotted one, was with us four days at the time the photo was taken. We kept him in a basket under the sink in the clinic. Chants were playing. Other furry ones would come up. Some snuggle him. An occasional puppy would climb over the side of the basket and cuddle with him. At night one or two would sleep with him. In the photo he's sleeping. It was his last day of paralysis. He'd been hit by a rickshaw and brought to us. His back was broken. He couldn't move the back part of his body, and there was some pain if he was moved too quickly.

Sad. Uncomprehending. His mother was no longer with him. She was somewhere on the streets with her other pups. His brothers and sisters. The clinic is a center of a lot of activity. He was bathed in waves of affection. In chants. Loved and embraced.

Poor Surya. Your Heart has to go out him. Your wishes that he be whole again. And be able to run and play. Dear, dear Surya. Come. Come join us. And rejoice.

Dr. Raja, in his quiet, deep, gentleness had been treating him for four days. Surya surrendering to his loving care. Neurobion for vitamins. Painkillers - both injected intramuscularly. It's amazing to watch Dr. Raja give injections. It's different than any other doctor I've ever seen. The creature doesn't even feel it....and, most importantly, Surya got daily anti-inflammatory injections right in his spine.

Wonder of wonders...on the fifth day he started walking. Hesitantly. But walking.

The wonderful short video was taken on the sixth. The shadow you see is Vishwa holding the camera and coaxing him. Throwing him loving sounds and kisses.

Vishua first took shots inside the clinic. But our baby couldn't get good traction on the slippery floor. So he took him outside for this 45 seconds of recorded joy. Watch how fearless our little Surya is. He goes up to these large dogs. His tail swishing back and forth. No hesitation at all.