A rescue story of Lakshmi ... 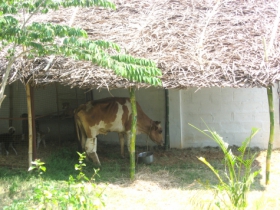 First she’s a real sweetheart. It’s very clear why God wanted her saved. Many cows butt you if you get too close. She snuggles. And is boundlessly patient while she’s being treated.

September 2008: We first heard of her in the Shelter when Dr Raja told me he was going out to attend to a cow that was hit by a truck and had a broken leg. That was at 3pm. He returned at 3:30pm saying that her owners didn’t want her treated. They told Dr Raja they were going to sell her for slaughter. We called Prema in Madras and it was confirmed that it was against the law to slaughter her under those conditions We sent Dr. Raja and Vishwa back with a letter for the owner to sign. Dr. Raja called: no problem, treatment was free, the owner agreed not to slaughter her and to sign the letter.

Intuition told me that something was going to happen. I hopped on the Honda and sped out there. I wasn’t sure exactly where they were but knew the road. Vishwa called me on the cell phone as I was speeding along. I had passed him a kilometer back. I turned around. When I got there, Lakshmi was gone. The owner’s brother showed up and, with two other men, shoved Vishwa and Dr Raja aside and pushed Lakshmi into the back of a small truck for the trip to be killed. They’d left five to ten minutes before. Vishwa and Raja looked dejected. I asked Vishwa if there was a chance of catching them. He said yes. I followed him on his motorcycle, speeding into town, left and right on narrow crowded streets. Somehow Vishwa had “psyched out” where they were going. We caught up to this small truck with a cow in the back….”Vishwa, is that her?”…”Yes” The truck was stopped in traffic. I pulled in front of it with my Honda and got out. Three men in the cab. I walked up real close and leaned in. Vishwa translating…”I’m with the Animal Welfare Board Of India (AWBI--Not true)”…”What are your names?” ”Get the “F” out of the truck” A crowd gathered - some friendly, some not … increasing tension … potential of physical violence. After half an hour of confrontation, they said they’d follow us to our Rescue Shelter, we’d keep her the night and, together with the AWBI and police, we’d straighten it out.

We were driving to the Shelter - Vishwa in front, me behind - and they turned off onto a small street. They told us to “F-off”. They off loaded Lakshmi, clearly intending to hold her until we left, then continue. The owner started talking to me but I told him I wasn’t anymore interested in what he had to say. All I understood was they had this lovely cow that had given them sustenance for eight years and that now that she had a broken leg he wanted to kill her and get 5000 rupees. I told him I now intended to do my thing and call in the AWBI and police. In the meantime we contacted the Municipal Councillor for the area and asked him to come.

By now, it was dark – about 7:30pm. I left to get the money and Vishwa arranged for transportation to the Shelter. About an hour later, Vishwa arrived. We unloaded Lakshmi and settled her in.

Afternote: 7 November 2008 – Lakshmi is in our Shelter. We’ve now had her for about 1½ months. She’s very, very sweet. If I walk up to her and kiss her on the nose, she snuggles cheek-to-cheek with me. She’s lost a portion of one of her rear legs (about six inches below the knee joint). She’s able to stand okay. We’ve built a small coconut leaf shelter for her and she’s very content … and very loved. We had an expert in who told us the leg was doing fine and would heal within a month or month-and-a-half. When it’s healed we’ll get an artificial limb for her, then she’ll either spend the rest of her life with us or we have a nice home in the country for her.

Afternote: 24 July 2009 - An artificial leg was not necessary - she’s able to walk around okay. She’s very content and is a very sweet presence. She gets along fine with the dogs. We’ve all come to love her and are going to keep her.