This is our miscellaneous monkey section

We cover here several experiences with monkeys. Some are not the full stories, but the videos speak for themselves.

In this first case we got a call from a compassionate soul reporting a wounded monkey. Pandi and Prem went out.

This video was taken when they first arrived. She’s in the tree with her baby. And you can see the something hanging from her behind.

Pandi climbed into the tree to get her. It ain’t easy to catch a wounded monkey, especially one protecting a baby. You can see that several attempts were unsuccessful. We don’t have any shots of the actual “catch” so I called Vishwa to see how they were able to bring her in. Pandi, after a while, got close enough to give her an injection of a strong sedative.

Ha! I suspected you were coming to catch me.

The tissue hanging was a covering from her stomach and came out below the anus. The poor honey had apparently been in a fight. Probably protecting her little one. The operation took a half hour. Dr. Bharati was on at the time. It wasn’t a severe wound. He stuffed the tissue back in and sutured it. The video below is post-op.

This video was during convalescence. Vishwa had put another baby in with her to acclimate him to being with a female monkey and baby. The mother was reasonably accepting. She didn’t give him a lot of attention, but it was still good for him. She and her baby were released ten days later.

It's good for the other little guy.

We only have partial coverage here.

Pandi and Kanagaraj went out with Vishwa. He’s a male monkey with a wound on his behind. That’s him in the tree. 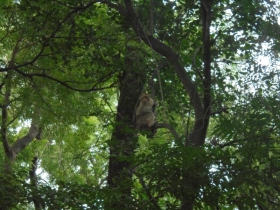 Are you coming for me?

It took a while to catch him. This video shows where Vishwa got close enough to give him a sedating injection.

Close enough to inject a sedative.

The photo on the clinic table shows the wound. It’s not very serious. He was treated and convalesced for several days before being released. 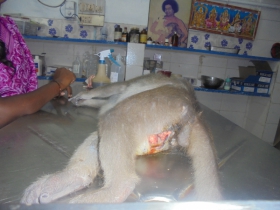 This is Prem and Kanagaraj releasing an adult male monkey after he was treated.

That’s supervisor Raja you hear giving them instructions as they’re carrying the cage to his territory…Generally, adult monkeys are anxious to be released into freedom. With babies it can be different.

As you can see in the first video, this guy really, really wants freedom.

In this video he realizes he's home.

And in this one Prem almost gets bitten just before the monkey makes his dash back to his beloved life of FREEDOM.

We got a call that a young monkey had a serious injury on his hand.

This video is of Vishwa in the process of bringing the little guy in.

This is simply the release of a young gal into freedom after she recovered.

So, so happy to be free.