This sweetheart had a personality that people and dogs, alike, rejected and he couldn’t make it on the street

It was already dark. Maybe 8pm. I saw him out of the corner of my eye as I was riding into town on my Honda two wheeler. He wasn’t doing well. Threw him a large biscuit. Then took a good scoop of Pedigree from my backpack. He came over. Clearly he was hungry. But he was more interested in me than food. He recognized me. But I, not him. He had the little notch in his ear which meant we had him in the Shelter and had sterilized him.

I called Vishwa who pulled up fifteen minutes, later. He agreed with “my take” on things. So Vishwa took him to the Shelter. Fed him. And we intended to keep him permanently.

Then over the early days it emerged that the poor guy was clingy and needy for affection and attention. And he didn’t know how to play. All the dogs, one at a time, after initially accepting him, ended up rejecting him. He was desperate to get affection from them. He just wouldn’t stop. Continuously being pesty and nudging them to gain acceptance.

Within a couple of weeks, almost all the dogs rejected his advances. After a while they got somewhat aggressive in rejecting. Then he started getting aggressive. AND so there were a lot of fights. And poor Keshav was an outcast. 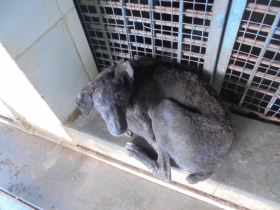 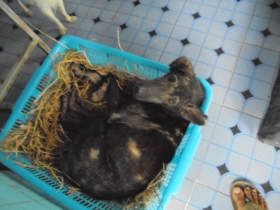 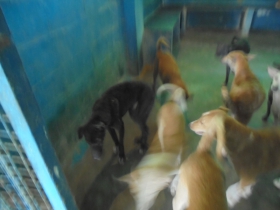 Vishwa and I discussed it. Thought we might try him in the garden where there was a lot more room and it might be less intense. But he didn’t make it there.

Somewhere about then an animal communicator came and told us that Keshav (we named him,”Keshav”) was terrified of being put back on the street. Both Vishwa and I then told him that we loved him and that this was his home for ever and ever. And that he was never going back on the streets.

He got extra reassurance from supervisor Raja and “cow eyes” Sekar. Whenever I came in I’d hold him on my lap and stroke him. And tell him I loved him…and that we would help him. 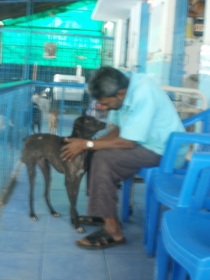 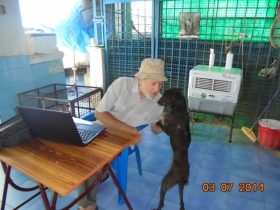 Leslie would hold him on his lap everytime he came in.

Months passed. Poor, poor Keshav. He just couldn’t get accepted. He got in so many fights, which became the pressing problem. The staff gave him continuous reassurance and love. But he was just rejected by the dogs.

I felt his pain. We all felt his pain. The animal communicator had found out that he had been with a family as a puppy. They kept him locked in a room. Beat him. And never let him play with other dogs. He never learned to play. Poor, poor Keshav. We’d never had a case like him.

Then slowly, painfully, he started being less noodgy. And it really was s-l-o-w. It was over a year that he was a rejected outcast.

I regularly asked Vishwa how Keshav was doing. Was he learning to play—a little?  Did he have any friends? Was he getting into fewer fights?

And about two months ago. Light. Blessed Light. He was starting to play—a little. And he was getting into fewer fights. And I started noticing that when I held him on my lap he wasn’t as needy. Then he started sitting up straight with his chin up, looking out, as I stroked his chest….And THEN, one day recently, he sat on the chair next to me!!!

I wouldn’t be telling you this story if he hadn’t made it across. It was just too painful. Maybe to me because it brought back ancient fears.

The videos below show him during the crossing. One shows him trying to play by mounting another dog—not sexually...just mounting. Him not taking the rejection and just keeping on being pesty until the other dog snapped.

I just want to play with you.

This video shows him trying to be included in the fun with two other dogs playing.

Then, these next two show him starting to learn to play without being pesty and without mounting.

And finally, the two last photos show him being accepted so that he could sleep and rest with the others. 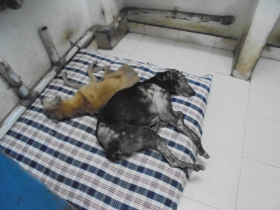 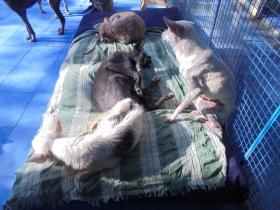 When I come to the Shelter, I can see him waiting for me to acknowledge him. And when I do, he in a detached way coolly surrenders to it.