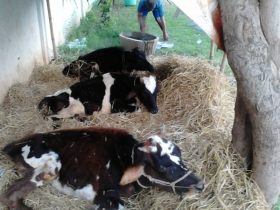 They were in a temple goshala (place where cows are kept and cared for) that was not open to the public. So people, generally, were not aware of the neglect. The temple itself was massive and well known. 1200 years old. And known to be fantastically wealthy. So money was not an issue.

We were alerted by a well known animal activist. We went in early morning, unannounced. It truly was shocking. The animals, young and old, were severely malnourished. A number bordering on starvation. Several died in the short eleven days we were involved. There was little protection from the rain. And it was filthy.

Vishwa spoke to the main caretaker who told him:

Two days later we went in. A number had been given away through a “woman’s welfare organization”. The total had decreased to 73. The number of caretakers had increased to 5. The food had been substantially increased. The cows’ stomachs appeared full.

Eleven days later we went in to check the progress and state of things.

It’s almost beyond comprehension how something like this could happen.