I saw a movie once. A true story about a dog named Hachiko. A professor found him one evening in the train station. He was a puppy. A beautiful puppy. Lost. He took him home. And a deep love/bond formed between them. Every morning Hachi would go with the professor to the train station. And every evening he’d go to station and wait for him. After several years the professor had a fatal heart attack while at school. Hachi waited at the station for several days. Then someone came to take him home. But every evening he’d meet the train and wait. The family moved to a nearby town taking Hachi with them. But he ran away and made his way back. He lived on the streets. And met the train every evening. People were mean to him at the beginning until a journalist covered the story. Then everyone became aware of the pure devotion. He met the train every evening for ten years. He died on the street. A bronze statue of him was placed in the town square.

And so, now onto the odyssey of dear Ranjita.

11pm. I first her near the center of town. Threw her a biscuit. But as I was passing thought she needed nutrition. Stopped and put down some Pedigree. It was dark. I couldn’t tell if she had a dark coat or no hair. Moved around the other side to look. And it was solid crust. One of the worst skin cases I’d seen.

Called Vishwa. He showed up in 15 minutes. On his way, He called Ramesh and Vijay. By the time they showed up Ranjita was thru eating and was starting to move away.

It was the beginning of a chase that lasted over half an hour. Down dark side streets. Thru alleys. Ramesh on his two wheeler getting in front of her to slow her down. Ranjita running around him again and again. Vishwa and Vijay in flat out pursuit. I, on my two wheeler, following behind. At one point we all passed two policemen on a sidestreet. Fortunately they knew Vishwa.

Was hard to believe that a creature in such condition could run flat out for over a half hour. Finally she ran into a dead-end courtyard. She sheltered under a stairway. Frightened. Trapped. Vishwa sat about ten feet back, talking to her. Reassuring her for fifteen minutes. Then slowly approached and picked her up in his arms. Started telling her he was sorry we had to chase her. That we were very good people and would help her. And then set her free.

Vishwa put her in the clinic that first night. And she was free to move around. Ramesh tried to give reassurance and support throughout the night.

Dr.Raja examined her in the morning. She unfortunately had a very bad case of scabies, which meant she couldn’t be set free in the general population until that was treated. She also had some bacterial infections, and a mild case of fungal. Other than that she was in surprisingly good condition. Her energy was good. Her liver and kidney were fine.

To begin we put her in cage 2, a retaining cage about 12 x 15 feet with a cushioned resting place. Vishwa put two sweet female dogs in with her. She got all kinds of love and caring from Sekar and supervisor Raja. But she didn’t respond to them or the dogs. She wasn’t depressed. Just sad. Deeply sad. She’d fought valiantly in the chase to avoid capture. But the reality was that she wouldn’t have survived more than a month, two at the most. And her death would have been an awful one. Dear, dear Ranjita. Ranjita with the unbroken spirit—FREEDOM. 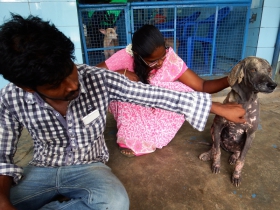 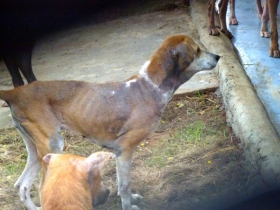 Then she was put into the garden where she could run free. She ate well and her physical recovery moved strongly and steadily. But never, not for a moment, did she frolic or show affection. Always solitary.

Three months later I passed an overweight dog on the examination table right by the front gate. She was lying on her side. She had a heavy brown coat with some white.  Dr. Raja was going to give her an anti-rabies injection before she was released. I hadn’t seen her in some time and asked who it was. Ranjita???  I couldn’t believe it and called Dr.Raja over to confirm.

I watched two videos they had taken of her release. And she didn’t seem overly joyful to me. I mean she ran around a lot. But her tail wasn’t wagging and she just didn’t seem overly happy. Then I realized that the person who was taking the videos was following her and she didn’t really know she was free, yet. I think she started realizing she was free as she got farther and farther into the distance.

Vishwa saw her two weeks, later.  She was happy. Very, very happy.  At least until she saw him. Then she bolted frantically away... We looked for her several times since to take videos, but couldn't find her. When we do we'll send it out - hopefully with her Beloved.

Sorry. Sorry. Time is tight. We'll try to update the statistics for the July newsletter.