He was a homeless dog that Venkatesh’s son was caring for. About 1 ½ years old. A car hit him and he had this awful break. One of Venkatesh’s workers brought him in. It was morning. And he was in a lot of pain. 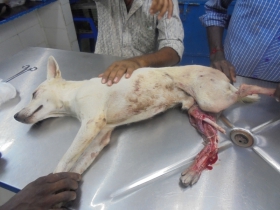 Dr.Raja gave him a steroid injection for shock. And an i.v. with anti-biotics and a very strong painkiller that controlled the pain in a matter of minutes.

He did emergency surgery. There was only a five to ten percent chance of saving the leg. But our beloved Dr. Raja went for it. The operation lasted 2 ½ hours. The video below is post-op. Dr.Raja gently picks up his leg so you can see how he peiced the broken one together.

We named him Raghu. And he was on painkillers for a week. So he was reasonably comfortable. And he was already allowed to move freely the next day. Gentle Sekar looked after him during the day. Pureheart Ramesh at night. He didn’t like to mix with other dogs or puppies. I remember him preferring to go off alone—under tables, in corners, in the closet.

Venkatesh’s son who had been caring for him on the streets and seemed to love him would come to visit frequently. He wanted to take him in. But his father said no. So Raghu was abandoned and left to have his home inside the Shelter.

Thus his journey unfolds. He adjusted to the Shelter in a few days but was not overjoyed to be here. Remaining solitary for a week or more, surrendering slowly to Shelter life, it took him a while to begin warming up. The puppies helped. Snuggling him throughout the day.

Two weeks down the line it became clear that his leg had to be amputated. Another adjustment for Raghu. He descended into Shelter life in I don’t know how long…a week, maybe two or three after the amputation. He wasn’t a happy guy. But not sad, either. Just living his life.

After amputation. Moving around but not really a part of things.

In these next two videos you can see he's starting to connect with the other dogs.

Now, as you can see from these last two videos it’s changed. He’s one of the guys. AND happy.

Welcome dear Raghu...Life will be good...The guys (and gals) you play with are fond of you...Enjoy...May all beings benefit...Thank you, God...With love, From da’ Shelter guys.